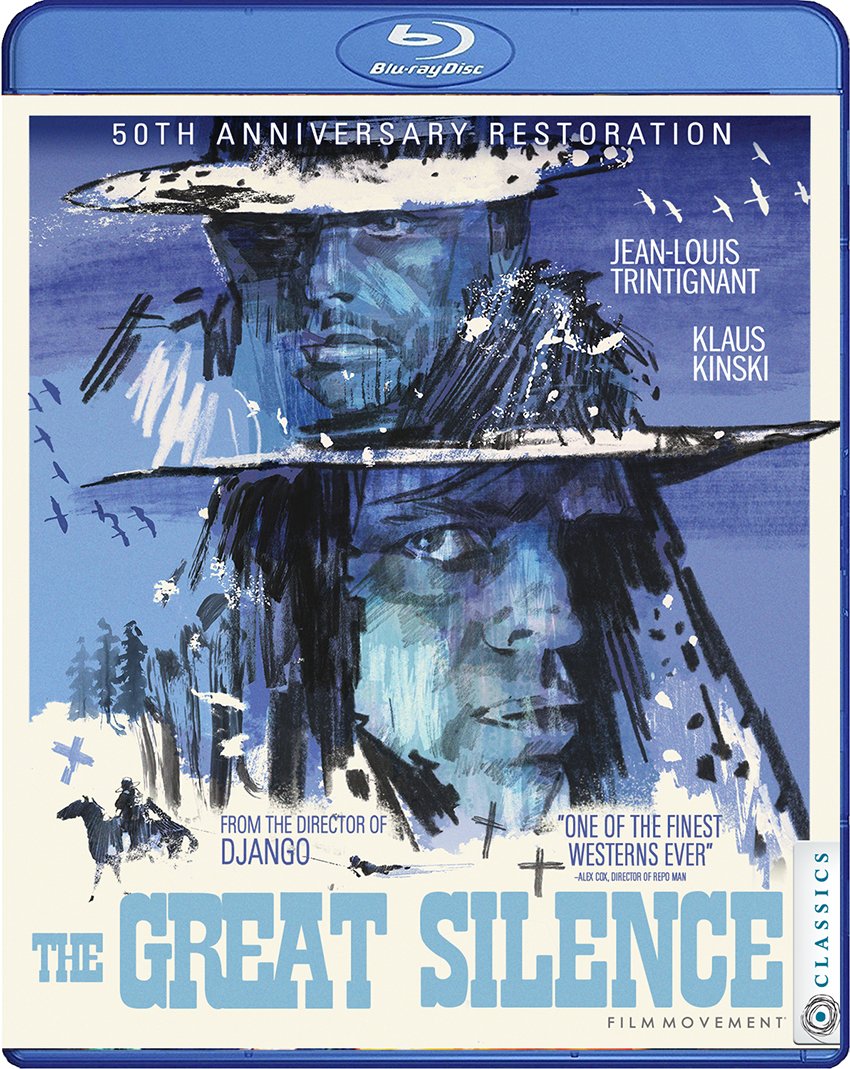 On an unforgiving, snow swept frontier, a group of bloodthirsty bounty hunters, led by the vicious Loco (Klaus Kinski Nosferatu, For a Few Dollars More) prey on a band of persecuted outlaws who have taken to the hills. As the price on each head is collected one-by-one, only a mute gunslinger named Silence (Jean-Louis Trintignant The Conformist) stands between the innocent refuges and the greed and corruption that the bounty hunters represent. But, in this harsh, brutal world, the lines between right and wrong aren't always clear and good doesn't always triumph. Featuring superb photography and a haunting score from maestro Ennio Morricone, director Sergio Corbucci's bleak, brilliant and violent vision of an immoral, honorless west is widely considered to be among the very best and most influential Euro-Westerns ever made.

- Western, Italian Style - This 1968 documentary on Italian westerns includes prime behind the scenes footage of The Great Silence.

- Ending the Silence - a new essay about The Great Silence by film critic Simon Abrams.

I'm not generally one for nostalgia, but I do regret the loss of a certain kind of craziness that used to flourish in movies the kind that is on rich and ripe display in "i"The Great Silence, a 1968 Italian western by Sergio Corbucci that is only now receiving a proper theatrical release in this country. There is something about the film's brazen mixing of incompatible elements that defies categorization, imitation or even sober critical assessment. It's anarchic and rigorous, sophisticated and goofy, heartfelt and cynical. The score, by Ennio Morricone, is as mellow as wine. The action is raw, nasty and blood-soaked. The story is preposterous, the politics sincere... The mood is sometimes jaunty, but The Great Silence is no joke, and the fatalism of its ending serves as an implicit critique of the sentimental optimism of many Hollywood westerns. Power speaks louder than silence. --A.O. Scott, The New York Times

Packs a bleak, bloody punch...[and] goes out with a devastating bang. - Simon Abrams, The Village Voice

Brutal, bleakly beautiful spaghetti Western filmed on stark locations in the Dolomites, with one of the most uncompromising and unforgettable finales ever filmed. --Leonard Maltin

The greatest spaghetti Western ever made. --Alex Cox, director of Sid amp; Nancy and Repo Man

Your support is essential, and we hope to see you at the Virtual Information Meeting.
Click Here

The Blood Tribe is currently negotiating a TOPGAS $17.6 million settlement agreement with the Government of Canada.

To access the information documents and learn more about the TOPGAS settlement, please click the "More Info" button.

For more information about this project or how you can get involved, please click the "Info" button.

In an effort to help address the Opioid situation, a pamphlet was constructed to provide information and raise awareness of the resources and contact supports available for Tribal members.

Blood Tribe Communications, along with DerRic Starlight’s Nuppets have developed a series of COVID-19 safety videos. All the videos are nestled in the prairie of the largest reserve in Canada, the Blood Reserve.

The new campus facility for Red Crow Community College is now under construction.

For more information about the project and to find out important construction updates, please check out our website by clicking on this button below. We are grateful for your support of this project in our community and we look forward to our opening in September of 2022.

The Blood Tribe Comprehensive Community Plan (BTCCP) will guide development in the communities of Standoff, Levern, Old Agency and Moses Lake. This plan brings together projects and planning that have taken years of hard work by Blood Tribe members, staff and leadership along with new opportunities and strategies into a planning framework that will improve how the communities work together in supporting the needs, values and desires of Blood Tribe members.

If you feel triggered or overwhelmed by any announcement of unmarked graves found
at Indian Residential Schools in Canada, there are supports available.